A  special cake with a crunchy surprise, which is also gluten and dairy free. The top decoration is made out of white chocolate which has dairy in it, but just don’t serve the decoration to those who are lactose intolerant. Start making this cake 2 days ahead.

Melt the chocolate in short 10 minute bursts in the microwave stirring each time. Add the rice puffs into the chocolate and thoroughly stir.

Transfer this into the prepared cake tin and press it into the edges so that it takes on the shape of the tin. Put into the fridge to set.

Prepare a 15cm tin by lining the bottom in clingfilm.

Mush the blueberries with a blender. transfer to a saucepan. Sift the cornflour onto the blueberries, stir thoroughly. Bring this mixture to the boil and shimmer for 1 minute. Allow to cool until 60 C, then stir in the gelatin.

Whisk the egg white with the pinch of salt until soft peaks, add half the sugar a little bit at a time until stiff glossy peaks.

Whisk the egg yolk with the rest of the sugar until pale and fluffy, add in the vanilla essence.

Cool in the tin, then wrap in clingfilm and keep in the fridge until ready to assemble the cake.

Chickpea water (aquafaba) – 150g
Pinch of salt
Coconut milk (put into the fridge, and allow the liquid to separate, discard this liquid and use only the solid mass) – 130g
Powder gelatin – 6g (bloomed in 30ml of water)
Sugar – to taste

Using a 17cm tin with the sides lined with acetate, put in 1 third of the coconut mousse. Then the blueberry jelly layer, then more mousse. Then the chocolate crisp layer, then the gf sponge layer. Freeze in the freezer until set – a few hours. Then take out of the 17cm cake tin and de-frost in the fridge over night and put the chocolate flower decoration on before serving. 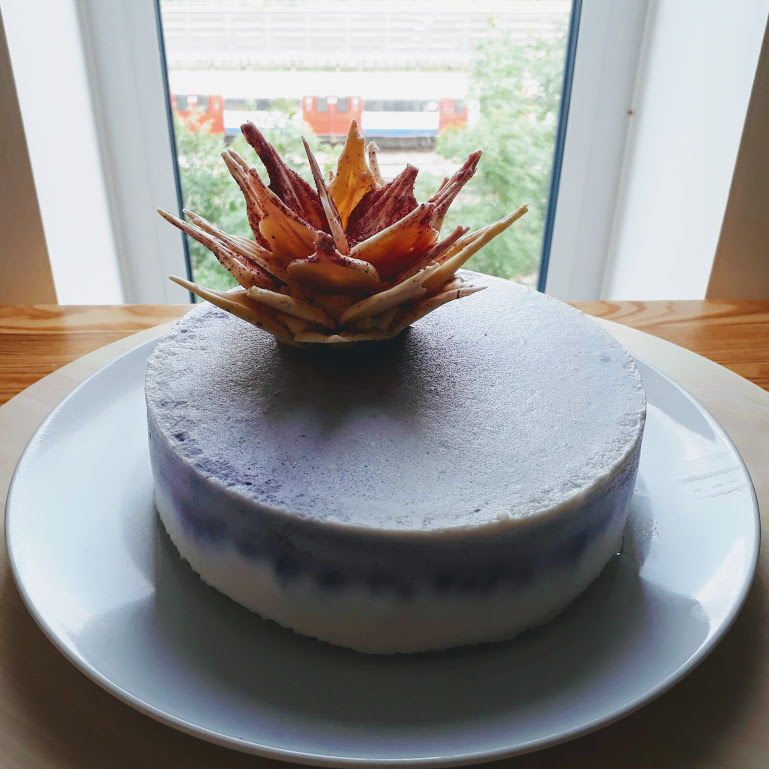